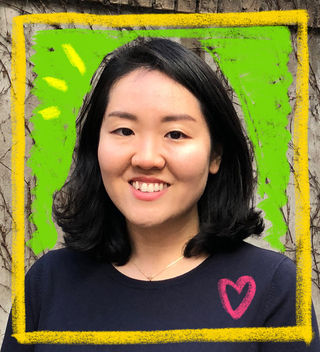 Aram Kim is a writer and illustrator as well as a designer of picture books for children. She was born in Ohio, raised in South Korea, and now lives in Queens, NY, happily surrounded by diverse food and culture. By day, she is an Art Director in the picture book team at Macmillan Children’s Publishing Group. By all other times, she writes and illustrates her own stories. Aram’s debut picture book Cat on the Bus was called a “beautifully designed visual work” by School Library Journal and included in the Children’s Choice Reading List 2017 by ILA/CBC, as well as New York Public Library’s summer reading list 2018. Aram likes bringing in Korean flair to works she creates, which led to her three book series Yoomi, Friends and Family including No Kimchi for Me!, Let’s Go to Taekwondo! and Sunday Funday in Koreatown.