We're Going on a Goon Hunt 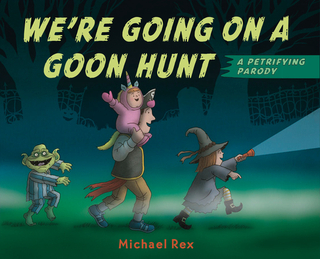 This hilarious companion to the NYT #1 bestseller, Goodnight Goon, is a spooky parody of We’re Going on a Bear Hunt.

We’re going on a goon hunt.

We’re going to catch a green one.

What a spooky night! We’re not scared.

A goon hunt is no easy task. A twisted tangled pumpkin patch, murky bubbling swamp, and foggy crumbling graveyard are just a few of the obstacles these kids will have to go through, skulking monsters included. And when the Goon finally makes an appearance—under the covers they go! Except one brave child who finds monsters more fun than scary.

The beloved classic We’re Going on a Bear Hunt gets a ghoulish twist in this goon-infused parody that perfectly plays with the rhythm and sound effects of the original. Mike Rex’s creepy settings and hilarious text will have kids demanding to giggle and shiver through the story again and again.